skip to main | skip to sidebar

Wow, it's been a while

So much has happened since my last post.  Here are the highlights:
1) Went to visit Baby's birthparents.  All went well.  It was like a visit with friends.  Baby was 15 months or so and her birth brother was about 2 and a half years old. Baby's birthparents had asked us to adopt from them again and we said Yes! But a week after the visit and a month before the due date, the birthparents decided to parent the impending baby.  We are so disappointed but...
2) we are preparing an application to an adoption agency.
3) Baby and I joined a play group via MeetUp and that's going well.  We've gotten friendly with a pair of twins and a set of triplets and their nannies.  Baby, being a singleton, is a bit overwhelmed by it, but she's getting better.
4) I've been sewing dresses and tunics for me and Baby. Baby's now walking and getting into all kinds of things, so I can sew  -- and more importantly, cut out fabric using the floor -- when she's napping or after she's in bed for the night.  Sometimes, I can do some sewing when she's awake. She'll play with supplies on the floor next to me.

Got a new phone, the iPhone 5 and now I'm having trouble uploading pictures from the phone to the blog.  Installed the Blogger app so I could post from the iPhone but that's not working either.  Blergh.

Back from Vacation and Growing Up

Last week we went to Husband's family reunion on the shores of Lake Ontario on the US side.  It was Baby's first time there.  She enjoyed the fresh air, walking around on grass, crawling and walking up and down and up and down the ramp.

She got along with all the relatives and they were all attentive and impressed by how well-behaved she was. Other than at shower time, nor at restaurants.  We're going to have to fix that.

Husband spent summers there, growing up, and when we started dating in our 20s, I would go as well.  The vacations then were about late nights on the porch barbequing with lots of beer. Then our 30s when we were all employed and no kids, it was restaurants, late nights, barbequing, and wine and beer and spirits. Now that we're all in our 40s and with a baby around, it's back to eating at the cottage and beer, but not such late nights any more.

Now that we're in our 40s, we see a rift between the family members of our generation who have stable employment and have "grown up" and those who have taken different paths and need financial support from the others. Part of it is due to the economy slacking, but part of it is due to their "naivete about needing money to negociate life in the world" as one of the older generation put it. Or as others put it, "being lazy slackers who will ride on you until you throw them off."

It'll be interesting to see how this develops into the future.

Anyway, overall, 5 days away from the world was lovely.  Highlights:
1) Lots of people to love on Baby
2) Good to catch up with family and friends
3) Going off the internet grid
4) Lots of BBQing
5) Sitting on the porch swing, listening to birdsong, leaves rustling, waves lapping
6) wore me-mades everyday.

I've been on a clothes sewing kick.  But I can only sew, and more importantly cut out pattern pieces, when the baby is napping.

But this is what I've made since I last posted 6 weeks ago:

This was supposed to be the Enchantment Under the Sea dress from Stitch Savvy by Deborah Moebes.  Made from Kaffe Fassett's Roman Glass fabric. I love this print and colorway.  I spent forever trying cut out the bodice so there's no unfortunately placed dots, and in the end, I just made it into a skirt. The waistband is orange bias tape. It's got the longest invisible zipper down the back, since I just used the zipper meant for the dress. 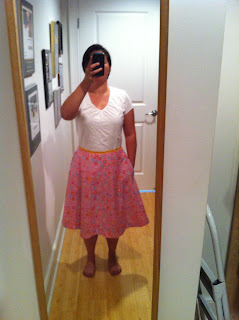 This is the Picnic Blanket Skirt from Tilly and the Buttons. The fabric is orange and white seersucker and pearly white plastic buttons. Per the instructions, there's an inch of ease, but I didn't like it.  Eventually I pinched in the sides. 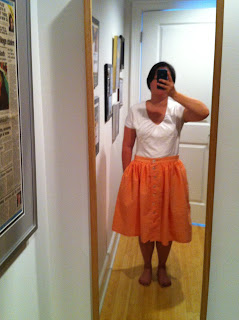 Husband went to Salt Lake City for work and he brought home this shirt for me.  But I don't wear clothes that say things.  So I cut down and made into a shirt for the 1 year old baby.  I didn't hem any of the edges. 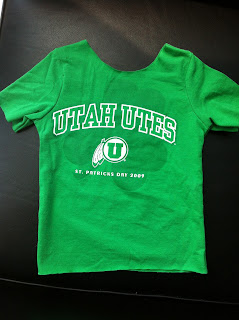 This is the dress New Look 6184.  The fabric is quilting cotton printed by balls of yarn with knitting needles. I thought it would look silly or quirky (which it is) but the first person who saw me in it, it took her a few minutes of conversation before she noticed the print. Instead of facing, I used bias tape around the neck and armholes. I've gotten compliments both times that I've worn it.  I'm really proud of it, since it's the most complicated dress I've made so far. 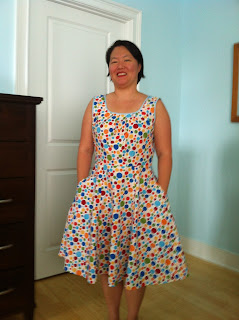 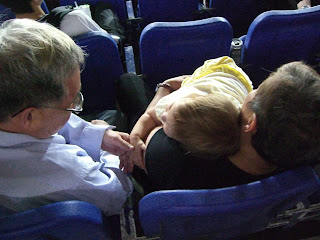 She turned 1 year old last week.  We took her to Taiwan to meet my parents, who are thrilled to finally see, hold, and touch their first and only grandchild.

Here we are at a baseball game and she fell asleep. My mom's holding her while my dad's holding her hand. My father's calling her gim swn, which means golden grandchild in Taiwanese.

They've already asked when they can come stateside to visit her (yes, Husband and I've been demoted, but that's okay).  It may be October, when they have a bit of downtime in their business. This gives my dad enough time to get his knees fixed so he can keep up with Baby.  She'll be walking and running by October!
Posted by Red at 12:25 PM No comments:

My sister asked me how I manage to get so much sewing done when I have a baby.  My answer:  I do it when she's napping.  Also, I don't really do much knitting anymore.  I'm trying to give my thumb a rest.  I did do a bunch of knitting while watching some "Lost Girl" but the pain's flared up again so I'm taking a break from knitting.

I've bought 2 classes from Craftsy.com:  How to Design and Make an A-Line Skirt by Deborah Moebes and Sewing with Knits by Meg McElwee.  I finished watching the A-Line Skirt class, but have yet to make anything from it. It's really informative and has helped me understand shaping better.

I'm currently watching the Sewing with Knits class and am looking forward to making the Surplice Dress from it. I really like Tunic O from Stylish Dress Book, but the sleeves are constricting.  I want to remake the tunic in a knit for more flexibility.

It's been a while since I've watched Once Upon a Time but I keep up with it via recaps at io9.com.  I just watched episode The Miller's Daughter and I thought it was very well done.  The moment when Cora and Regina just smile happily at each other was just wonderful.

Regina started out the series as the Big Bad, but I really like her character.  As the series goes on, she's shown to have been as manipulated as anyone else, and the way she tries to be "good" for the sake of Henry really gives the show heart.

And speaking of recaps at io9, this recap of Arrow  made me laugh. ( http://io9.com/5987501/arrow-waltzes-john-barrowman-through-a-zombie-apocalypse )  Arrow's been on my to-watch list, but this recap may be the one that pushes me to start.

Lastly, we finally saw Brave, the Pixar movie.  I loved the mother-daughter theme, and thought the animation was so well done.  The little moments were sweet too, like at the end when Elinor regains human shape and kisses Merida all over the face. Which parent hasn't done that to their little ones?

Husband thought that the witch was reminiscent of the witch in Spirited Away.  That's not surprising as John Lasseter at Pixar is a big fan of Hideo Miyazaki's movies.

My take-aways from Brave:  be very specific what you ask for in spells and really, more conversations and openness between Merida and Queen Elinor would have avoided this whole mess.
Posted by Red at 1:12 PM No comments:

Red
My favorite color is red and my passions are social justice, friends and family, art and creativity, and travel and culture. On the other hand, I'm a blue living in red state.